As promised in http://twitter.com/rohit11/statuses/895182069 here is the report of my flight experience from Delhi to Jaipur.

The day started nicely where my driver brought me from Connaught place to airport in flat 14 minutes. Though the roads were clear at 6 in the morning, but still 14 minutes is too less for this distance. It was fun.

I reached airport, and after all the formalities and waiting we started boarding. The bus at the boarding gate took us to a deserted bay where only small planes, helicopters and airforce cargo planes were standing.

There we got to know that we are about to fly in an ATR-42-320 50 seater plane. Its not that I haven’t flew in an ATR but this was a bit scary. The first glimpse of it made me feel that I’m going for skydiving or an air force exercise. It was due to the look of front gate also with that strappy net guard. 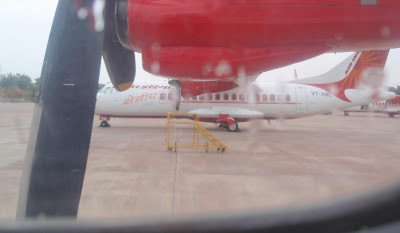 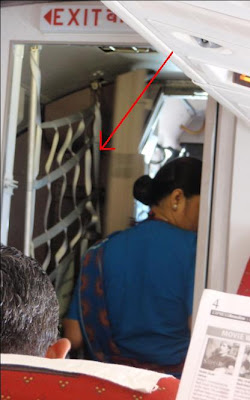 And this is the strappy net thing which made me feel like skydiving. And yes thats the elder aunt standing outside the cockpit.

When I grabbed my seat I noticed that the hook of table tray is broken the tray is fixed like this under the seat cover. This reminded me of the movie “final destination” :(. Even the news paper kept in the seat pocket was 2 days old. 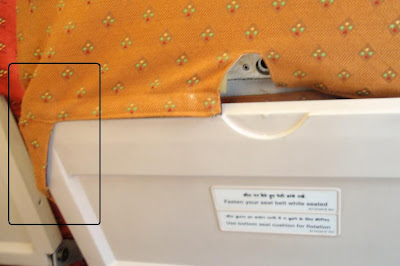 When I looked out at the fan on both the side, I noticed the right fan was revolving faster than the left one. First I thought it’s just my fear. But later it turned out to be an actual problem (maybe) 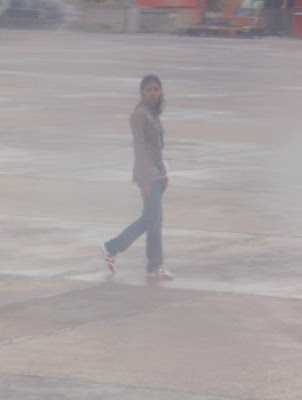 I saw this girl standing outside when we were boarding but later on she turned out to be some instructor or ground crew member without a uniform or proper props. She was signaling the pilot to start and take a turn as if she was signaling a truck and guiding the parking of it.

Anyway we reached the runway and were about to start the taxi when the pilot announced that due to some technical problem they are returning to the bay. Now this added to my scare. Pilot explained that they are seeing some warning signal for the left fan (see I was right) and they are going to check whether it’s an issue or just a false alarm.

When we reached the bay, this truck sign babe turned out to be some flight engineer or whatever. She came in, checked the status and went out. And we started our way back to runway without a word from the pilot. Fan speed was still uneven. Now along with me other co-passengers were scared and someone yelled to know the status. The pilot said that the situation is “under control” and we are going to take off now.

All my life when airhostess gives those safety instructions on emergency landing on water etc, I always thought when I’ll get a chance to do that. But this time I was not at all in that mood. Here during the safety instruction the elderly aunt (hostess) said that we don’t have automated oxygen support system, if anyone need it kindly contact us. I suppose they had spare oxygen cylinders :((

Anyway in the second time we were able take off from ground. I was still very much scared. The complete process made us one hour late than scheduled time. The whole journey we were flying in low altitude but that I suppose is dependant on the model of plane. That was good because we were able to see a lot of stuff down. 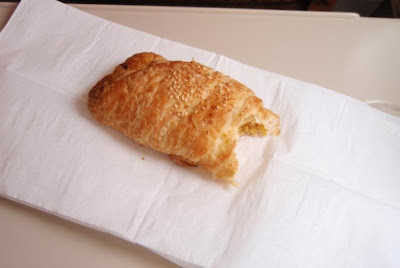 Then came the time on serving breakfast, the elderly aunt brought a basket of muffin and puffs. It was served in just a tissue paper, no plates, and no condiments nothing. And then water was served. The first thing I did in this case was checking the seal of bottle and packing date. Atleast that was all ok.

In the midair, a slightest of turbulence sent a shiver down my spine.

Anyway the flying time was just 50 minutes and we somehow landed at Jaipur airport.
LAND Ho!!!!
Don’t ask me about the feeling when I landed my foot on earth. It was like completing an adventure sport with only scare and no fun. This was my flight, I clicked it with happiness of landing safely at Jaipur 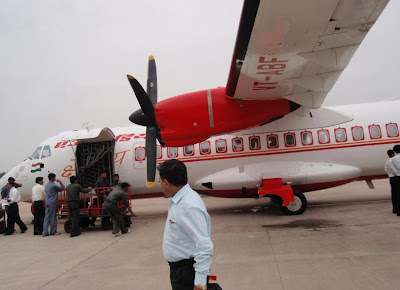 Day before of my flight, one of my friend suggested me not to take a flight to Jaipur as the driving time is only 3 hours with wonderful roads, but I had already booked so ignored her suggestion. In the flight I was thinking, why I ignored her. I should have taken the road route, in any case it took me same time in the flight too.

0 thoughts on “Horrible flight from Delhi to Jaipur”