The way internet has barged into our lives, we have been seeing the world in a very new way.I stumbled on this image created by Byte Level research LLC which shows the new worldAs per Byte LevelEach ccTLD is sized relative to the population of the country or territory, with the exception of China and India, which were restrained by 30% to fit the layout. At the other end of the spectrum, the smallest type size used reflects those countries with fewer than
A lot of tweets today informed me about launch of Damn Vulnerable Web App (DVWA) which is basically an aid for security professionals to test their skills and tools and help web developers better understand the processes of securing web applications.I had an old list of tools/plug-ins/utilities etc which can be helpful while playing with DVWA and I'd like to share the same for you to learn WebApp Security better.Proxy Servers:WebScarab: http://www.owasp.o

Every time you run an application on Windows box, a prefetch file is created in "c:WINDOWSPrefetch". This file with extension .pf keeps information for optimizing the load time of the application (as the name suggests).I always wanted to see what's there in the .pf file. Recently NirSoft has released a tool called WinPrefetchView which can be used to see the content of these files.image source : nirsoft.netNote: This website http://nirsoft.net is a wonder

On the brighter side :)# Shifted to Delhi from Pune.# Bought another car.# Worked for Commonwealth Games 2010.# Finally got married to Stuti.# Went to Puri & then Nainital for honeymoon.# Delivered talks/lectures in IIM Ahmedabad & IIT Madras.# Tajmahal & Delhi tourism with Stuti along with few more places in north.# Decided to quit Commonwealth Games 2010.# Organized ClubHack2009.# Organized Indo-UK cyber security roundtable conference in Club...

image: wikipediaChristmas & New year is here and its the time many people buy/exchange gifts. So if the next shiny gift in your hand is a smartphone, then remember following tips to be safe & secure your data.1. Don't loose track of your phone.This one goes non-technical. Don't loose the sight of your smartphone. Keep you eyes on it when you leave it anywhere, especially at the airport security checkin. The nature of data stored on phone makes it
two one za twotwo two za fourtwo three za sixmany of us have grown up mugging this and I always wondered what is this ZA, is it a synonym of "equals to" ??Just a casual browsing today answered this long pending query of mineits actuallytwo 1s are twotwo 2s are fourtwo 3s are sixThanks to the anonymous who clarified this thing to me today.If we divide the whole table in columns, I always thought that its the "1st column" being counted "2nd column" times giv

Last week, Techcrunch reported rumors of the release of the Google Chrome OS. They stated that the info came from a reliable source, and indeed that source was reliable. Google had an event at their headquarters, and indeed provided new details and a demo of the Chrome OS. The Chromium Blog has some great videos that provide some additional information about Chrome OS as well. The Chromium OS source code is available for download (Chromium OS is the open- 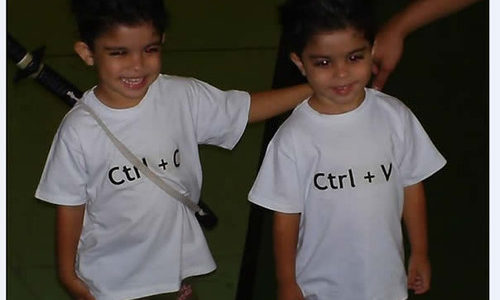 I thought you had to do it twice in a row ;)Windows lovers' waymac fanboys' wayWhat way will a Linux geek use? cp or ctrl+yy or something else???Source: http://www.geeksaresexy.net/
On 5th October theregister reported more than 10,000 password were leaked mysteriously on pastebin.com. See this tweetAs a followup study "Acunetix Web Application Security Blog" did an analysis on the kind of password people use.Some interesting findings are as follows-Statistics: The list initially contained 10,028 entries.There are 8931 (90%) unique passwords in the list. The longest password was 30 chars long: lafaroleratropezoooooooooooooo.The shortes
If you want to know the order in which Windows drivers are loaded during boot up you can see that. I'm not sure why would you like to know that but if you have time to kill you can try this.C:> wmic loadorder list fullThe output will look something like thisDriverEnabled GroupOrder Name StatusTRUE 1 System Reserved OKTRUE 2 Boot Bus Extender OKTRU